Some vignettes from the past week 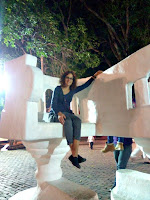 Last Friday George and I went to visit our talented-artist friend Kreso, at an art gallery event. Afterwards walking back we saw the new 'big chairs' in Parque Santa Lucia. It totally reminds me of Edith Ann, for those of you who get the reference!


We also happened to walk by Mercado 60 which is a newer trendy sort of food court, with a variety of food options and live music on certain nights. The seating is mostly shared picnic benches and tables. It was the perfect time to check it out since we were hungry. We opted for burritos. Mine was a veggie burrito - served like a salad in a tortilla wrap, loved it. George liked his meat burrito as well. 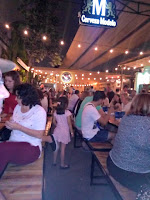 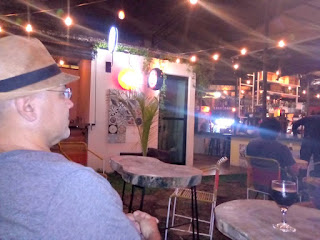 The band quickly had people dancing, and I thought the place had a great vibe 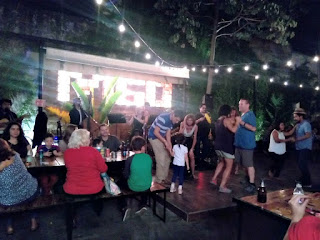 Tuesday morning George and I drove to Centro on his scooter and had breakfast at our old favorite place, Cafeteria Pop. We had our usual coffee, fruit parfait, and hotcakes. We discovered that they slightly raised their prices. That dish is now 65 pesos, but obviously still extremely budget friendly. After breakfast I headed over to attend a Women's Club board meeting.

After the meeting I went to visit my friend Martine, as we decided to start our own little informal writing group. She prepared a lunch for us - cucumber and tomato salad with pita-like crackers, and humus to spread on top. She also shops at the slow food (farmer's market). It's a great place to get organic produce, specialty items, and even fermented products, which I already mentioned. I have tried the kefir (which is a fermented milk) a couple of times now as well.

It turned into a full day, as our friend Alex joined us later in the afternoon. As evening began to cool the air and darken the sky, the three of us went our for some local Yucateccan comida. It was actually cold enough to enjoy sopa de lima, and salbutes.

(A salbute is a puffed deep fried tortilla that is topped with chopped cabbage, pulled chicken or turkey, tomato, pickled red onion, avocado, and pickled jalapeño pepper. Salbutes originate from the Yucatán peninsula- from Wikipedia). 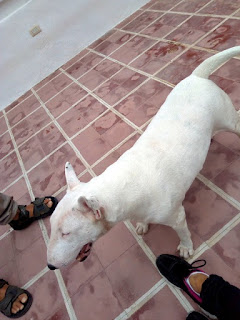 On Thursday George and I were out, and stopped by to see our friend Jerry, and the one-and-only Holly.


Later, I was at a grocery store with my pal Mario and we noticed this young blonde woman, and her tattoo on her leg of a palm tree. It had sand below and a compass in the middle. Mario asked her about it and we learned she was visiting from Denmark, and just got that tattoo here in Merida this week!

It's nice to remember that people visit Merida from many different places. And someday when Mario and I have plenty of extra money, we know where to get our next tattoos.