We spent a couple of weeks in Southern California taking care of various things and spending time with family. One day we drove to downtown Los Angeles to request an apostille to bring back to Mexico. The drive wasn't bad until we got to the 101 freeway, then the traffic was super slow.

We were going to try and visit someplace like Universal Studios, but the admission is at least $100! (The last attractions I remember are from the 70's like the parting of the Red Sea, the Jaws experience, and the Ice Tunnel) Too expensive, we didn't go.


Driving by the Wiltern Theater on Wilshire Blvd., I remembered going to a few concerts there, like Peter Murphy, back in 1990. 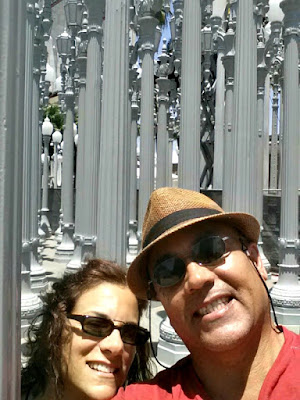 Along Wilshire Blvd., we stopped at La Brea Tar Pits which George had never been to. I remember going on a field trip there way back in elementary school (and probably enjoyed it more then).

The La Brea Tar Pits are a group of tar pits around which Hancock Park was formed in urban Los Angeles. Natural asphalt has seeped up from the ground in this area for tens of thousands of years. The tar is often covered with dust, leaves, or water. Wikipedia

We managed to take care of everything, including selling our car. Now we are in the process of becoming temporary residents, and living in Merida full-time for the time being.
Posted by Andrea at 2:13 PM